Someone recently said to me that ‘the more crazy it gets at the Jordan Café, the more beautiful it gets,’ which is true and which was certainly true last Thursday. Let me set the scene … Thursdays at 5 pm can be one of the busiest times of the week for the Jordan Café. With Chapel at 6 pm and Dinner at 7 pm – Beforehand, the place is very busy getting ready. The kitchen is super-busy cooking, preparing and setting up the Hall for Dinner. We usually get an OzHarvest delivery around the same time. Groups are arriving to help out. It is all happening. And then there is Chapel: It has to be set up, musicians arrive to rehearse, AV is set up, the Team get together and so on. So, it is all fairly hectic. I am praying, and hoping, that it all goes smoothly, that it all comes together and we can open up. But, not last Thursday.

An ibis walks in!

A curious ibis decides to wander in to the Hall! And not leave. Just what we need! One hour before we open up. We try a number of ways to entice the ibis out: Lights out, no noise, food, all doors open, etc. We tried our best but the ibis was not having any of it. And, it had perched itself on top of the rafters! Impossible to get to. I called the RSPCA, National Parks, the Council, a number of businesses to see if anyone could help! But they couldn’t, well not straight away. Though WIRES (Wildlife Information, Rescue and Education Service) said they would send a team out, as soon as one was available. Which was great but with less than an hour before Chapel starts, we needed help now. 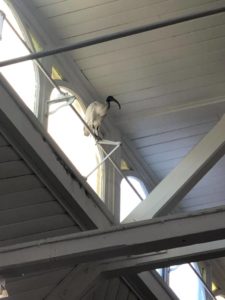 So, with a late start, we opened the doors to the Chapel and started Chapel. We were still hoping that something could be done during Chapel before dinner was going to start in the Hall. We continued to set up the Hall expecting that we would be having dinner in there. Chapel was a beautiful time! (During Chapel, one person from our Community shared how she was living in Newtown in the 1980s and they discovered a penguin in the back lane! A penguin in Newtown! The night had a very avian feel now). While Chapel was going on, I was getting updates from the Team during Chapel about the ibis situation. Ibis Watch! Then at 6:30 we just had to make the call that Dinner was going to be moved from the Hall to the Chapel! The great teams from Wesley and YWAM jumped in and made their way to the kitchen to help pack up the Hall and get ready for Dinner in the Chapel! (Thank you so much to Wesley and YWAM for being so willing to help).

Chapel finished up and now we had to get it all ready and set up for Dinner! The call went out to ask if people could help stack and rearrange the chairs and to get the tables set up. The Community just stepped up and everyone just chipped in. ‘What can I do?’ ‘Where does this go?’ ‘Can I help?’ The crazier it gets, the more beautiful it gets. It was something different having dinner in the Chapel and it made it all the more special. Everyone had a great time, the meal was superb and there were plenty of wonderful conversations. When it was time to pack up and clean: Again, everyone just chipped in. It really was beautiful. Something that was very stressful and an inconvenience turned in to something that was special and beautiful. The Jordan Café!

The ibis was still there though.

We had to leave it in the Hall overnight now, we had the doors open for a while and tried with more food. But it still wouldn’t make its way out. By now you could just imagine the mess it was leaving. We will try again tomorrow.

The Team opened up on Friday morning and sure enough the ibis was still there. What would we do? We decided to set up the Hall as usual expecting lunch to happen. We called a bunch more businesses, followed up with WIRES and so on. The stress was building again as the morning went on. If the ibis was still there, we could not have lunch in the Hall and the Chapel was being used, so we couldn’t use that either. At this stage my mind is racing and I am trying to think of options: The car park? Camperdown park? Not open? All we could just do is hope and pray. In the midst of it all happening, we decided to still have our ‘find-out’ Fridays group in the Hall, which was great and we started looking at the topic of Salvation! While the group was meeting a team from WIRES arrived! Hallelujah. The team were wonderful but they had a big job trying to safely capture the ibis. We continued on with our ‘find-out’ group while the WIRES team tried to capture the ibis … By this stage there were three fellas, with ladders, nets, long poles and so on. Were they going to capture the ibis before we opened for lunch? We continued on with our ‘find-out’ group amongst all the commotion. We had a great time chatting about God’s Salvation, what it means and how we work it out in our lives. 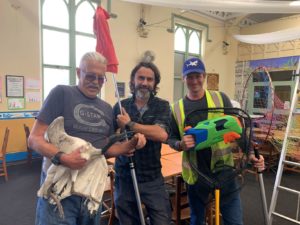 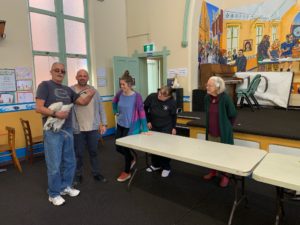 As we usually do, we closed the ‘find-out’ group with prayer and it was a beautiful time of open prayer as we prayed for each other. It was coming up to 12:30 pm and I just started to close our prayer time. Then from out of nowhere this huge ibis dropping fell from the sky and landed, smack-bang, on the table right in front of me! Can you believe it! I looked up and there is the ibis perched right above the group. The whole group jumped up, in shock and all we could do was laugh. Was this a sign God? I mean c’mon! Really? 😊. More crazy, more beautiful.

The wonderful guys from WIRES safely caught and released the ibis at about 12:45. Thanks fellas – a HUGE effort. We then had 15 minutes to get everything ready for lunch, we all jumped in and helped out. Lunch went ahead at 1 pm, phew. I didn’t know whether to laugh, or cry, or both. What a crazy 12 hours or so, but also so beautiful and we will never forget it.

Lunch was a beautiful time. The Jordan Café: Crazy and beautiful.

During the lunchtime Bible Study group, we read Romans 8:31-39 (More Than Conquerors) and after the stressful, crazy and difficult time we just had it was great to be encouraged and lifted up by these words. For all of us, we could just rest in these words, be strengthened and know that in all things we are more than conquerors through Jesus:

No, in all these things we are more than conquerors through him who loved us. For I am convinced that neither death nor life, neither angels nor demons, neither the present nor the future, nor any powers, neither height nor depth, nor anything else in all creation, will be able to separate us from the love of God that is in Christ Jesus our Lord.